THE BATTLE OF SAM JACINTO

Marshall Morris is at It Again

Marshall Morris is spending the last few days of summer at home in Justice, Texas, before going off to college. The affable young man, who seems to always take a twisted and amusing path, finds love in Mallory, a diminutive African-American cheerleader. Unfortunately, after he befriends a crusty group of old vets bent on saving a war memorial statue, an idle comment craters his romance.

At first, he clueless about how his narrow beliefs can negatively affect surrounding people who matter. Angered by what he considers irresponsibility and disrespect for our country, he condemns the wanton destruction of monuments, including those of confederate leaders. It takes the painful loss of Mallory for him to experience an epiphany. He finally recognizes his folly by honoring those who were bent on destroying the country by upholding slavery and white supremacy. Memorials to such individuals are wrong, and only those heroes who sought to build our country are worth remembering.

When a real estate developer attempts to destroy a memorial to local Marine war hero, Sam Jacinto, so he can build a shopping center on the site, a motley band of old codgers and teenagers are cobbled together. Armed with paintball guns and water hoses, they dig a defensive perimeter around the monument. Against all odds, Marshall and the old guys fight a heated night time battle to defend the memorial and save old Sam Jacinto. The spirit is willing, but the old men and kids simply cannot hold off professional hit men. The battle is lost unless Marshall Morris can pull one last trick out of his bag. 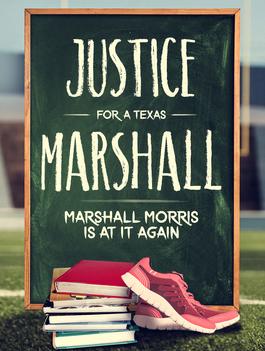 Marshall Morris just can’t stay out of bizarre predicaments. He is a member of the football team in his senior year at Justice High in Texas. The old school, hard line coach, who is an unabashed bully, plays favorites but has no time for hard working kids of average ability. When Marshall discovers by accident that he is accepting cash kickbacks from a college booster, the young man is determined to expose him. A series of oddball and amusing situations is inevitable.

Things get complicated when his best friend falls for the coach’s daughter. The epicenter of high school social life a local pizza joint where the pies are terrible, but the fun is terrific. Marshall’s best laid schemes to attract female attention consistently fail until after a goofy incident he unwittingly hooks up with the brainiest girl in the senior class.

In the ultimate game against their bitter rival, Justice builds a big lead. A perfect season is minutes away when everything unravels. In the scant remaining seconds, only Marshall can save the season. Does he succeed? Unfortunately, no one can save devious coach.

Marshall Morris is ebullient. He is finally out of Justice High and is eager to start classes at the university in Austin, Texas. He has only just arrived at college when the unimaginable pandemic explodes into everyone’s life. Classes are postponed amid the confusion, growing hysteria, and dearth of accurate information. When he returns home, it shocks him to discover he has tested positive for the virus. He reluctantly accepts his quarantine, which he likens to a prison sentence, but, as always, weathers his predicament with a smile. His mood darkens when friends and family become infected. Marshall is convinced they caught it from him.

Marshall remains close with Mallory, his diminutive African-American girlfriend. They talk incessantly on the phone, but he finds it impossible to stay away from her. He convinces her to meet at night, if only to chat at a distance. Marshall arrives in complete scuba gear, including mask and flippers to be sure he will not transmit the virus. Unlike many of his teenage contemporaries, he takes social distancing seriously and rallies against those kids who refuse to wear masks or otherwise conform to mandated guidelines. It crushes him when he hears the disease has devastated a cadre of old vets who are his good friends.

After he is refused his old delivery job at Cow Paddy Pizza because he has been infected, he catches on with Tommy Kinder, whose realty business is in desperate straits because of the pandemic. Kinder must find a quick source of cash or lose everything. Back in his car selling days, Kinder got to know Randy Shiner, a rich playboy from one of Texas’ wealthiest oil families. Unexpectedly, Shiner approaches with a bizarre scheme involving a south American country wanting to have their COVID miracle cure drug tested in the United States. With big time cash at stake, Kinder acts as the go-between with Shiner’s international contact and a sad sack doctor, who has full access to the COVID patients at a local hospital.

Marshall becomes unwittingly tangled in this incredulous plot, which involves injecting the miracle drug into COVID patients. Nothing will stop him when, by chance, he discovers a surely fatal injection is to be given to his own mother. The hospital’s COVID ward is a fortress. Can he penetrate it and get to her in time?

A Texas high school youth stumbles and bumbles his way through one amusing adventure after another in a series of novels as he gradually moves toward adulthood .

Marshall Morris is at It Again